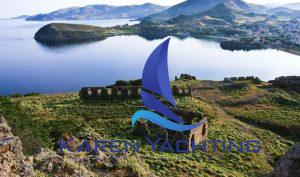 In the days when people got sick and no suitable medicine could be found anywhere, there was an island in the eastern North Aegean that promised hope and healing. Just a small handful of the miraculous volcanic soil of Limnos would – it was said – do the trick and banish the malady.

Today, this very island retains its healing qualities in another sense. Though well off the beaten track, its friendly inhabitants, serene, open landscapes and golden sand dunes offer balm to body and soul. And as if these were not enough, there are unusual archaeological sites, romantic castles and scrumptious local products. Among them are the  abundant, affordable fish and seafood dishes, wonderful wines, honey, cheese and pasta from the land that used to be one of the breadbaskets and vineyards of ancient Greece.

What to do on Limnos?

The castle in Limnos’ principal town occupies a steep, rocky promontory flanked by two seaside neighbourhoods – the Romeiko (Greek) and Turkiko (Turkish) Yialo (shore). One of the island’s major attractions, its only access is from the east. It was erected by the Byzantine emperor Andronikos I Komninos (1118-1185) on the site of older walls, most probably ancient. In the 1970s, the municipality of Rhodes donated to Limnos three deer of the Dama dama species, two does and a buck. They went forth and multiplied and there are now some 50 to 70 deer living freely within the castle walls, adding to the pleasure of your visit.

The villages of Limnos

Holidays in traditional villages made up of genuine stone masterpieces. No matter which one you happen to stop in –  Myrina,  Kontopouli, Romanos, Kontia, Katalako or any other – you’ll be introduced to the art of the stonemason; the decorative reliefs, the remarkable finishing techniques and the ‘mantras’. These are not   the usual isolated sheep pens or stables you’d find elsewhere, but more sophisticated complexes of farm buildings.

Limnos has a long tradition in certain types of food. It’s famous throughout Greece for its dairy products, honey and durum wheat. Look for cheeses (such as melichloro, kaskavali and kalathaki), rusks, whole-wheat flour and handmade noodles, as well as a large variety of wines, red and white, that have a distinctive taste thanks to the volcanic soils. The best known red grape varietal is called Kalambaki or Limnio (Appellation of Controlled Origin). The most popular white is the Muscat of Alexandria. They were famous even in Homer’s day.

Hephaistia and the Cabeirian mysteries
Your trip to the North Aegean will include several significant attractions. Discover them all! The ruins of Hephaistia are what remains of an ancient city that flourished during the 5th and 4th century BC. The god Hephaistos was its protector and so he was worshipped here accordingly. North of Cape Chloe, you’ll find the celebrated sanctuary of the Cabeirians, also dedicated to the worship of Hephaistos. Going by the  myth, the Cabeiroi were the children of Hephaistos and the sanctuary was the scene of the Cabeirian Mysteries which were related to the rebirth of nature and fertility.

Golden sand dunes
These natural formations are found in the northern part of Limnos, covering an area of 70,000 sq m. An extremely rare phenomenon, in Greece at least, this surreal landscape is attracting more and more visitors by the year.

The island with the salt lakes
Near Kontopouli are wetlands consisting of three lakes – Alyki, Hortarolimni and Asprolimni (or Salt, Grassy and White). Alyki is the largest. It connects to the sea through a small canal and in summer the seawater dries to produce high-quality salt. All three lakes are under the protection of the EU’s Natura 2000 network, since many migratory birds spend time there, as any of you with a passion for nature will want to

Register with your email

Please enter your username or email address. You will receive a link to create a new password via email.